The Dervish Gets The Hollywood Touch 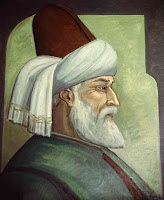 Following the announcement by Mr. David Franzoni, the writer of the blockbuster Hollywood movie the Gladiator, that his upcoming project will deal with the life and teachings of the famous and controversial 13th Century Sufi scholar, Jalauddine Al-Rumi, ЯP reached out to Mr. Al-Rumi in his palatial residence in Delirial Dimension, to gauge his initial reaction.

“Well it’s about damn time!” Mr. Al-Rumi incanted during our Skype call. “I’ve only been the bestselling poet in the U.S. for what, a decade now?” He added: “And my life is the stuff of legend. Add to that a possible love triangle involving me, my daughter and my best friend, and dozens of whirling young men in white robes. And wine, and it really bugles the mind that they have waited this long to come up with the decision.”


As to his take on the possibility of having Leonardo DiCaprio playing him, while Robert Downey Jr stars as Shams Al-Tabrizi, the Holy Dervish of Our Momentary Rapture didn’t seem to be so impressed with the choice. And the reason… “when will Hollywood stop playing these stupid games when it comes to casting?  I am Persian, so is Shams, and I bet there are plenty of Iranian-American actors who don’t think much of the Mullah regime, not to mention the Iran Deal, who will be more than happy, not to mention suitable, to play the roles. Let’s not do another Gods of Egypt here. Enough is enough.”

Posted by Amarji at 9:18 PM No comments:


In an exclusive hand-written statement delivered to ЯP offices in an envelope sealed with perfumed organic glue and bearing the mark of her lips, and transported in a briefcase handcuffed to the wrist of a male stripper with a fluid sexual persuasion, as he a point of asserting, aspiring First Lady Melania Trump explained that, just Mrs. Clinton proposed to hand over the reins of the nation’s economy to her husband, former President, Bill Clinton, she, too, managed to prevail on her husband and convince him of entrusting her with the nation’s education system.

“I want to teach our children about trusting themselves and letting go of their inhibitions.” She wrote. “I want them to know that image is everything, and that a brand that has a well-managed image gets imprinted on your mind and can never go out of style. And our kids don’t want to go out of style, do they?”

We might never know seeing that most of “our kids” were not available for comment, seeing that they had better things to do, while those who were there were busy staring at the messenger with their mouths wide open, but probably not their minds. As for those who seem to have gotten the message, they all went out on an emptiness-induced killing rampage before we got a chance to talk to them.

Posted by Amarji at 6:13 PM No comments:

A delirium-inducing celebrity-related thingy, imagined even real, real even when imagined, and completely irrelevant, even when maintaining the appearance of purpose. Notice: All celebrities appearing here, even the fictitious ones, are real, but not necessarily actual, and all their statements and quotes, especially those deemed libelous, for whatever unenlightened reason, are their own, even when they are factious but somehow actual, and have absolutely nothing to do with the author of this blog, or the editors of ЯP, no matter how delusional he/they may seem at times, or happen to be, for real.